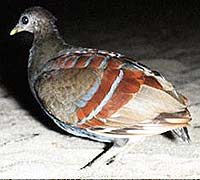 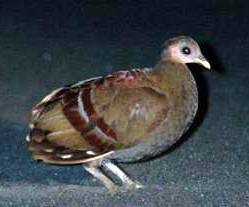 Justification The rapid population decline of this megapode through over-exploitation is projected to continue which, combined with its small, declining and increasingly fragmented population, qualifies it as Vulnerable.

Range & population Eulipoa wallacei is endemic to the Moluccan Islands of Buru, Seram, Haruku, Ambon, Bacan, Halmahera, Ternate, and Misool off Irian Jaya (from where there is only one old record), Indonesia. The vast majority of the population nests at two sites: Galela on Halmahera (c.26,000-28,000 individuals in 1997) and on Haruku Island (c.8,600 individuals in 1997)6. The coastal strip of North Seram held c.3,000-5,000 individuals in 19976. It is probably extinct on Ambon, Ternate, Bacan and Kasiruta, while the situation on Obi is unclear. Buru still has nesting grounds, but numbers have been greatly reduced since the beginning of the 20th century.

Important Bird Areas Click here to view map showing IBAs where species is recorded and triggers any of the IBA criteria.

Ecology: It inhabits dense, evergreen rainforest, also occurring in degraded forest and coastal scrub, from sea-level to 2,000 m although perhaps more typically above 750 m, except when nesting. It lays and buries its eggs (which average at least 20% of adult body weight) nocturnally at communal nesting-grounds, chiefly on solar-radiated sandy beaches or other loose, unvegetated substrates. Egg-laying occurs year-round but timing, spacing and depth of burrows and behaviour at nesting sites are influenced by lunar cycles1. The birds have been recorded switching to new nesting sites when traditional sites are unsuitable3.

Threats Over-harvesting of its highly nutritious eggs is the main reason for its decline, even in some areas where traditional regulatory management is practiced. Civil unrest in the Moluccas has prevented conservation efforts over the past five years. However, on Haruku nesting success increased from the late 1990s onwards apparently because egg-collection virtually ceased owing to political unrest3. Since 2005 the political situation has stabilised and uncontrolled harvesting has resumed3. Natural predation of eggs and chicks by Varanus lizards, snakes and birds of prey poses an increasing threat as colonies decline. Predation by introduced cats5, dogs and pigs has also served to reduce the number of egg-laying birds3. Sand extraction for local road construction and other small-scale development projects potentially threaten nesting grounds. Deforestation (through logging and agricultural encroachment) is presumed to be a threat in its non-breeding habitats.

Conservation measures underway It has been legally protected since 1979. Traditional management regimes for sustainable egg-harvesting have been observed for at least 80 years at the two main nesting grounds, reputedly without serious detriment to the species. Surveys of nesting grounds on all Moluccan islands and Misool took place between 1994 and 1997, including a biological study at the Kailolo nesting ground on Haruku island. Translocation of eggs from this site to the nearby Desa Haruku nesting ground helped to replenish the number of nesting adults returning in subsequent years3. Kailolo nesting ground has been monitored continuously since 1994, involving local people4.

Conservation measures proposed Determine the impact of recent civil unrest on population status, particularly at Haruku Campaign for full legal protection of nesting habitats and corridors at and around viable nesting grounds, particularly at Galela and Haruku. Conduct education programmes and work closely with local people to achieve and maintain sustainable egg-harvest regimes. Monitor breeding success at selected key nesting grounds. Determine the dispersal, range and movement of adults and chicks through the use of radio-tracking and genetic studies.