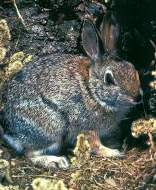 Cottontails and Other Rabbits

Cottontail rabbits inhabit much of the Western Hemisphere from southern Canada to South America. The animal gets its name from the fluffy snow-white underside of its tail. Cottontails vary from 14 to 18 inches in length and weigh from two to three pounds. Generally they are brown with buff sides and white under parts.

They live in any kind of country where they can find brushy shelter. Under the brush they make trails by nibbling off plants at the base. Only a rabbit can see the trails in the summer, but they become very noticeable in the winter. Hunters often place snares across them. Along the trails each rabbit sits quietly in a form during the day, dozing, washing itself, but always alert for danger. When it is frightened it stamps the ground with a hind foot, perhaps to warn other rabbits. Probably they can feel the vibrations or hear the thumping.

American rabbits live alone. Each rabbit occupies a couple of acres and knows every square inch of it. European rabbits live in colonies in underground burrows called warrens. These rabbits have been introduced into the United States and are increasing in numbers in the East. The Southern states have swamp and marsh rabbits. They are darker than the cottontails, and their tails do not have white undersides. These rabbits are good swimmers. They do little harm to farmers, for they live on water plants.