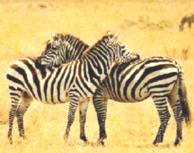 Zebra belong to the family Equidae, hoofed animals chara cterized by one toe. This includes all horses and horse-like animals of the world. This single hoof is probably an adaptation for fast motion on hard ground. Existing wild species include the Asian wild horse, Asian and African wild asses, and zebras (found only in Africa). Species of zebra include the Grevy’s zebra (E. grevyi), the mountain zebra (E. zebra), the extinct quagga zebra (E. quagga) [which was exterminated before the end of the 19th century], and the plains zebra (E. burchelli).* The zebras at Woodland Park Zoo represent the southern population and are commonly referred to as Damara or Burchell's zebras.

Zebras live throughout eastern and southern Africa. Their home ranges vary in size from 12-240 square miles (31-622 sq. km). Extremely social animals, they share their range with a wide variety of other grazers and browsers, particularly wildebeest, kongoni, gazelles, oryx and other antelope. 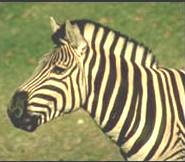 Zebras inhabit open, grassy plains or well-grassed woodlands. They can also be found on mountain slopes up to 14,500 feet (4,420 m).

In the wild: Plains zebra rely almost totally on a variety of grasses, along with some additional browse like leaves and twigs.

In the wild, mares reach sexual maturity in 2а4 years. Males are able to compete for mares after they reach about 4 years of age. When gathering females for breeding, rival stallions compete fiercely by kicking and biting. Once a male establishes a harem, ownership of that harem is rarely disputed, unless he is unfit. The gestation period of a zebra is about 12 months. Since a mare may come into estrus within days of giving birth, she can conceive almost yearly. The female gives birth to usually one foal, as twins are rare. At birth, a foal weighs about 70 pounds (32 kg), can stand almost immediately and run within a day. Although a foal may graze within a week of birth, they continue to suckle for up to 16 months. The average juvenile mortality is about 50%, mostly due to predation by lions and spotted hyena. 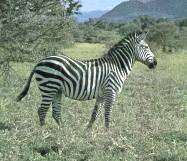 Plains zebra are social animals. Although they may live alone, they usually form bachelor groups and small families of 5а20 animals, consisting of a dominant male, mares and offspring. These zebras can either be sedentary or migratory; their lifestyle is dependent on the availability of food. Where food is mostly plentiful year-round, such as the Ngorongoro Crater in Tanzania, they lead a sedentary life. In seasonally dry areas like the Serengeti of Tanzania, small families of plains zebra gather to form large herds that migrate in search of food. Staying together as a family group within large herds, they migrate up to 500 miles (805 km) per year during their circular trek to and from the Serengeti.

Plains zebra are extremely dependent on water and never wander far from waterholes, where they usually drink at least once a day. Of interest, it is the responsibility of an adult mare (often the oldest), to guide the family as they move from area to area and ensure that they never wander too far from water.

Plains zebra are noisy and restless animals (due to predators). They have a distinctive call, which may be described as a frequently repeated barking whinny. Their whinny is more similar to a donkey whinny than a horse whinny. At night, families gather together while one family member remains awake to look out for predators.

Seen One Stripe, Seen Them All?

Not when it comes to zebras! While all zebras are easily identified by their dark and light stripes, each species of zebra has its own variation of striping. A Plains zebra has rather broad stripes, especially towards its rump. The color ranges from black to dark brown on a white to buff background. In some cases, there will be shadowing on the flank and rump between the dark and white striping. Although there is no color variation between the sexes, plains zebras do vary in color and pattern across their range. Moving from the north to the south of this specie's range, there is a tendency for the stripes on the hindquarters to become less well defined.

Other species of zebras exhibit varied striping as well. The Grevy's zebra has narrow and closely spaced stripes that cover most of the body and extend to the hooves. Mountain zebras tend to have narrower stripes on the body than the rump, with no shadowing on the flank and rump like plains zebra. Mountain zebras have faint stripes between darker stripes. The extinct quagga zebra often had very little striping at all, some being almost stripeless.

Are Zebras White with Black Stripes or Black with White Stripes?

Apparently, most Africans think zebras are black with white stripes. Zebra skin color is mostly black, but what we see are rows of white and black hair. This question is something similar to "which came first, the chicken or the egg?"

Naturalist W. J. Burchell brought the first specimen of this species from South Africa to the British Museum!

Each zebra has its own personal striping pattern. This makes identification of individuals easy for researchers!

While several attempts have been made over the last two centuries, zebras have never been successfully domesticated!

Woodland Park Zoo's zebras can be seen in the zoo's award-winning African Savanna. Other mammals in this exhibit include the African wild dog, lion, giraffe, hippopotamus and fringe-eared oryx. Take time to look for African savanna birds.