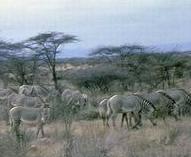 Food: grasses and some foliage. 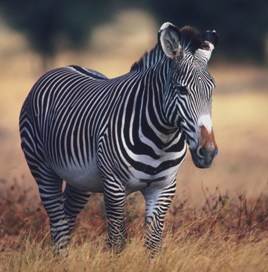 Grevy's zebra is the largest of all the zebras and it is an endangered species. Grevy was not the discoverer of this species, but a President of France who received the first specimens known to the scientific world.

It is widely believed and accepted that this zebra was the famed "hippotigris" (horse-tiger) of the Roman circus, so the specimens so graciously received by President Grevy may have been new to science, but they had been known by much earlier Europeans.

At first glance all zebra species look very similar to one another, but Grevy's zebra is probably the most easily recognised of them all. It is a very striking, tall zebra with huge ears and narrow stripes which encircle the rump in a concave pattern.

Territory: These zebra usually live in small herds of up to fourteen individuals. There are family groups as well as bachelor herds, but the biggest and strongest stallions are solitary for much of the time, each occupying a territory of about one mile in diameter.

Feeding: like all horses, the Grevy's zebra eats mainly grass and spends most of the daylight hours grazing. It prefers tender shoots, but usually has to eat mostly coarser grass. Leaves, bark, buds and fruit are also eaten.

Grevy's zebra has adapted well to its desert-like habitat and seems able to withstand extremes of both heat and thirst. It can survive for several days without eating or drinking.

Breeding: normally only one foal is born to a female after a gestation period (the time between mating and birth) of thirteen months. Most of the babies are born between May and August. The young zebra has brown stripes and a mane which stretches from the shoulder to the tail.

The background colour of the foal's coat is light brown instead of white. This protective colouring helps the foal to "freeze" and blend instantly with its background.

The foal can stand on its feet within one hour of its birth and can run with the herd after only a few hours - this gives it a much better chance of escaping from predators, usually lions. Young males leave the herd when they are about two years old and join bachelor herds. Eventually they will collect mares to form their own new herds or perhaps challenge old or weak stallions and take over their herd.

Several years ago there was a great increase in poaching, particularly in northern Kenya, and there was a great demand for the narrow-striped skin of the Grevy's zebra for the manufacture of handbags, purses, slippers, rugs, wall-drapes - and even clothing. This resulted in the sharp and sudden decline of the species. Since Kenya banned all hunting, and the export of zebra skin products, the poaching has largely stopped, but numbers have not yet recovered sufficiently for the Grevy's zebra to be removed from the official list of endangered species.

The Grevy's zebra is the largest of the wild equids and is usually considered the most primitive morphologically. Adults attain shoulder heights of 140 to 150 centimeters (55-57 in.) and may weigh 400 kilograms (880 lbs.) or more. Its very narrow and closely spaced stripes make the Grevy the most strikingly beautiful of the zebras. The stripes extend all the way to the broad hooves, leaving only the belly white. A broad black dorsal stripe is set off by a narrow zone of white on either side. Grevys are long legged and rather slenderly built with a long head. The black-tipped mane is relatively long and erect; their ears are very large and rounded. Grevy's zebras bray in a manner similar to a donkey.

Grevy's zebras are essentially confined to the semi-desert of northern Kenya east of the Great Rift Valley and north of the Tana River. Their range extends into neighboring parts of Ethiopia and Somalia. During the rainy season mature stallions establish territories onto which mares come to foal and probably to breed. Gestation is thirteen months, longer than any other equid. Once the foals are born, the mares stay within two kilometers (1.2 mi.) of water and are almost always with the territorial stallion. Foals do not drink water until they are three months olds and -- unlike any other equid -- are left in "kindergartens" frequently guarded by the territorial male while their mothers go to water. Grevy foals begin to forage much earlier than do feral horse foals: a six-week-old Grevy's zebra will graze as often as a five-month old horse. This accelerated development of feeding capability allows the young Grevy foal to become independent of its mother at a relatively early age.

Grevy's zebras are under continuing pressure from human encroachment on their habitat. During severe East African droughts in recent years, pastoral peoples have blocked the zebras' access to vital water holes and mortality rates have been high. http://www.imh.org/imh/bw/zebra.html