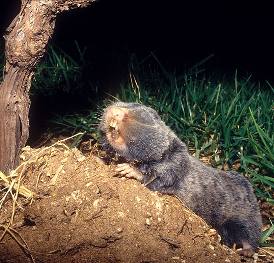 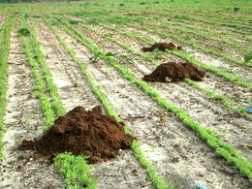 Genetic variation in 12 populations of blind subterranean mole rats (Spalax ehrenbergi superspecies), representing the four chromosomal species in Israel, was studied through the analysis of 19 nuclear microsatellites. Results indicate that genetic diversity (as measured by A and He) is higher in populations that are distributed in drier parts of southern Israel.

Climatic factors such as water availability coupled with temperature related variables explained 76% of variance in He. These findings suggest that natural selection might be playing an important role in maintaining microsatellite polymorphism in Spalax, as predicted by the environmental adaptive theory of genetic diversity. The microsatellite based UPGMA tree splits the 12 populations into two major clusters representing the species pairs Spalax galili (2n=52) and S. golani (2n=54) and S. carmeli (2n=58) and S. judaei (2n=60). There is very little geneflow between these species pairs, except for one population (Afiq) of the S.carmeli (2n=58) species. We hypothesize that the unique genetic structure of the Afiq population is due to its proximity to the hybrid zone between S. golani (2n=54) and S. carmeli (2n=58). 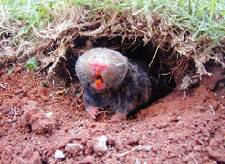 The eye of the blind mole rat, Spalax ehrenbergi. Rudiment with hidden function?

The rudimentary eyes of the mole rat (Spalax ehrenbergi) are located under the skin and do not respond to light stimuli. However, removal of the eyes disturbs photoperiod perception in these animals. To help clarify the possibly remaining function of the eyes in this species, the authors studied their development and ultrastructure. In the early embryos the presumptive eye regions--the epithelium, lens vesicle, and optic cup--appear initially normal. As development progresses, the iris- ciliary body complex originates prematurely from the margin of the optic cup and shows a very rapid and massive growth. This pigment-laden tissue mass remains attached to the corneal stroma, obliterates the anterior chamber, and prevents the formation of the corneal endothelium and Descemet's membrane. In the developing lens the elongation of the lens fibers leads to the formation of a rudimentary lens nucleus that becomes disorganized and vacuolated and eventually also becomes vascularized. The optic fissure fails to close, the eyes remain colobomatous, and the optic disc appears atrophic. In contrast, retinal histogenesis progresses relatively normally, resulting in structurally reduced but well-differentiated photoreceptor, neuronal, and ganglion cell layers in the adult eye. Immunohistochemically, the presence of opsin could be demonstrated in the photoreceptor cells. The latter features may indicate that these rudimentary eyes are still functioning in the complex neuroendocrine pathways mediating photoperiodicity.