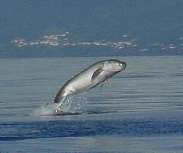 The Pygmy Sperm Whale is widely distributed in tropical, sub-tropical, and temperate seas. Records of sightings are scattered from Ireland and the Netherlands down the North Atlantic to the Canary Islands and Madiera, and from Nova Scotia to Cuba. Other sightings have been recorded in the South Atlantic, the Indian Ocean, and the Indo-Pacific.

Classification: The Pygmy Sperm Whale, Kogia breviceps, was classified by the Compte de Blainville in 1838, one of two species recognised in this genus. The specific name, breviceps, means 'short-headed'.

Description: This robust whale is really a smaller version of the Sperm Whale, with the same large, bulbous head containing spermaceti and the short narrow mouth. The snout is pointed in young animals but reverts to the familiar rectangular shape in adulthood.

The slightly-hooked dorsal fin and the flippers are small and stumpy, and the broad tail flukes are less rigid than those of dolphins. The body colour is a dark bluish grey, fading to a slightly pinkish off-white underneath. A thin whitish line runs downwards from behind the eye and the external ear to the throat, appearing as a false 'gill'. Maximum weight is 400kg, and a maximum length of 3.3m is attained in both sexes. There are no teeth in the upper jaw, but around 24-32 in the lower.

Habitat: Pygmy Sperm Whales are oceanic animals, moving across and over the continental shelf to feed.

Behaviour: There have been very few observations of the Pygmy Sperm Whale, and these suggest that it is a sluggish and slow-moving animal. The blow is inconspicuous and low, and after blowing the cetacean simply drops out of sight. It rarely approaches boats, and when startled evacuates a reddish-brown intestinal fluid as a decoy before it dives. Pods contain less than ten individuals.

The Influence of Man: Small numbers of the Pygmy Sperm Whale are killed by Japanese and Indonesian small whalers, but these killings are not thought to influence world population levels. However, larger numbers of this small cetacean - and many others - are caught in gill-nets, for example, off Sri Lanka. www.cetacea.org/ psperm.htm