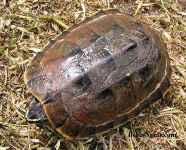 Comments: This small and beautiful turtle is rare in the wild and extremely rare in captivity. This species has the reputation of doing poorly long-term in captivity which may be a result of heavy parasite loads and its unusual diet.

Captive Care: There are a few Snail-eating Turtles that have established in captivity despite their initial delica

te nature and a history of poor survival rates. Apparently, this is one of those species where numbers is the answer. Of many that are imported, a few will begin feeding on redworms, and other items more accessible than their usual meal of snails. Those specimens will probably form the captive population for this species. This species can be set up in tubs, stock tanks, or aquariums though the tubs seem to work better as they offer larger and more secretive surroundings. These turtles are not swimmers and tend to cruise along the underwater scenery and walk along the bottom in search of food or secure hiding spots. They will bask and large slabs of slate and driftwood logs have proven to be effective basking spots. Imported Snail-eating Turtles should be established in water that is soft, clean, oxygenated and with plenty of underwater decorations. Water temperature is best kept at 76? to 78? F (24? to 26?C) with a decrease in winter and an increase in the spring to stimulate breeding. 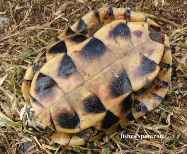 Feeding: In nature, these turtles feed almost exclusively on freshwater aquatic snails. In captivity, a few individuals have been switched from snails to earthworms and redworms. Others initially feed on earthworms and redworms and these have proven to be the most easily established specimens. Within a few weeks, they accepted Reptomin® floating sticks and then slowly began eating other varieties of commercial turtle food.

Common Health Problems: Imported Snail-eating Turtles arrived with a variety of health issues. Many have been dangerously dehydrated, heavily parasitized, and heavily stressed. This stress, combined with heavy parasite loads (mostly nematodes), has caused the death of many of these turtles. We feel that an initial treatment with Baytril® and Panacur® immediately upon their arrival will be an important step to establishing this exciting small species. Unfortunately, they are now very rare in the wild and it is unlikely that they will be imported in any numbers in the future.

Breeding: Very little is published about these turtles including information on courtship and breeding. Liat and Das (1999) report that nesting takes place between December and March in Thailand and April in southern Vietnam. They report that the eggs, usually 3-6 in a clutch, are small and brittle and incubate for 97 to 292 days. A simple breeding setup for Snail-eating Turtles would no doubt be similar to enclosures for mud and musk turtles. A keeper should offer them a fairly large enclosure relative to their size to allow the turtles to choose a suitable area and to help keep aggressive activity to a minimum. Be sure to offer multiple underwater decorations to allow them some space to get away from each other. An egg-laying site consisting of a cat litter pan of sand and peat moss and covered with leaves should be appealing to females. As many small freshwater turtles lay their eggs at the bases of plants, we would presume that this would help with this species as well.

There is no doubt that hatchling Snail-eating Turtles are extremely small. They do well in a small enclosure that offers them a smaller space to chase prey. The water should be filtered and in the 74? to 78? F (23? to 26? C) range. Water level should be low (4”) and they should be offered plenty of live plants and driftwood. The decorations should provide them underwater exploration sites and also break the surface of the water to offer a good basking site. Place UVB-emitting bulbs over the enclosure. A spotlight with a low-wattage bulb (40-watt or 60-watt) should be placed over the most accessible basking spot. This basking spot should reach 85? F (29? C). Their enclosure should also house a variety of live prey including small guppies, mosquito larvae, and blackworms and they should be offered commercial turtle food soon after they begin feeding.